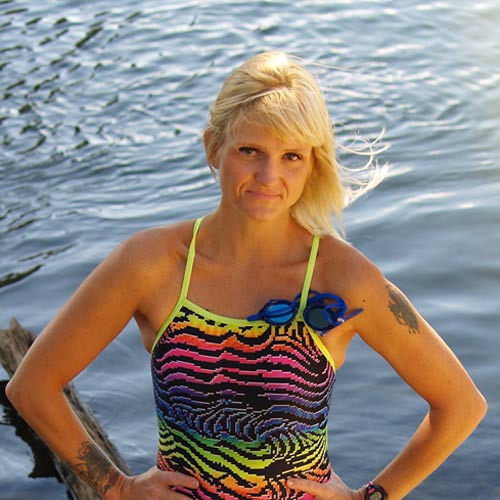 I remember the first time I swam in the ocean like it was yesterday. That one single act, changed the trajectory of my life completely. This trip is when I first fell in love with Hawaii Blue. For me, the crystal blue water is paradise. My time in it is therapy for me. When I had a bad day, I would often crave time in the water as if “I had the worst day at work, I need some time in Hawaii Blue to decompress.”

It was 1985 and I had visited Hawaii with my grandma. I remember it as one of the best trips of my life.

Hanauma Bay is a protected reef on the island of Oahu. It is the iconic beach from the classic Elvis movie, Blue Hawaii. The drive to Hanauma Bay is one of the most beautiful in the world. The sweeping vistas of the ocean waves crashing along the jagged, black rock of Oahu’s coast are truly breathtaking. This drive will take you past the tide pools of Waimanalo, the Magnum PI house, Sea Life Park which includes Dolphinquest, the Makapuu lighthouse and Sandy Beach.

As I waded into the cool, blue waters of the Pacific, I was filled with trepidation. Random thoughts about sharks, jellyfish, and barracuda filled my mind as I slowly walked deeper into the water. I was astounded by the amount of life I was seeing in the water. This was my first experience with the majesty and beauty of a coral reef.

I had a handful of fish food with me. I envisioned a tiny fish gingerly taking the food from my hand. However, I accidentally dropped some food into the water and the fish began to swirl around me. I was completely terrified! The number of fish was staggering. Beautiful rainbow colored parrot fish, the lovely yellow tang, moorish idols and the humuhumunukunukuapua’a (Hawaii’s state fish) all call Hanauma Bay home along with green sea turtles and 400 other species of fish. I was engulfed with sea life. Once I realized that they weren’t going to eat me, I began to relax and enjoyed watching them dart about. I loved the buoyancy of the Pacific. I loved the sea life. I loved the the beautifully colored coral underneath me.

I found that if I dove below the surface, it became quiet.  I found a kinship with the creatures that live underwater. I have been a swimmer all my life. I have very good breath control. This allows me to submerge myself and become one with the underwater world with no equipment between myself and the sea. I didn’t know it, but I had found my place in this world. Strangely enough, my place in this world is in the open water. It is where I am truly happy. Joy fills my heart when I swim in the open water. I feel free and I feel a connection that cannot be expressed in words.

Have you ever wondered why we are drawn to water? It is ingrained in our DNA. When we hear the rhythmic sound of waves crashing, we are soothed. When we have our toes in the sand and we look out at the water, there is a peace, there is a connection. Water is life and to my kindred marathon open water swimmers, it is heaven. It is home.

I went to Hanauma Bay a second time in 1991. My mom was competing in the Kona Ironman Triathlon and we stopped over briefly on Oahu. I immediately noticed a decline in the amount of fish in the water. It was enough to shock me. There weren’t the swarms of colorful fish like my last trip. It began to tug at my heart. I left Hanauma Bay that day pretty bummed. I didn’t know that our planet’s reef are such a delicate ecosystem. I had no clue that the very sunscreen I wore into the water was contributing to the demise of our precious reefs.

In 1994 I quit my job and moved to Kona. I spent 1 year on the Big Island of Hawaii. I spent 15 years living in Kailua and Kaneohe on Oahu. There is magic in Hawaii. It is truly paradise. It calls to me sometimes. That may sound completely crazy but it’s true. I miss it like a dear old friend that I haven’t seen in years. Once Hawaii touches your heart, it doesn’t let go.

I have done open water swims in some of the most beautiful water in the world. The Turks & Caicos, Bermuda, and Dubai just to name a few. The Turks & Caicos has the 3rd largest barrier reef in the world. On the beach just outside our hotel, there was a big enclosure encircled by buoys where we weren’t allowed to swim. It was a piece of reef that was being destroyed by the very people so enthralled with the islands. Day after day, we would hear the shrill whistle of the lifeguard telling tourists to stay out of the enclosure. I swam around the perimeter of the reef diving down and seeing what was underneath. I saw a 5 ft barracuda that sent me dashing for the shore.

In Bermuda, every single beach we went to had sections of bleached coral. It was white with a grey slime covering it. There were patches that were alive with fish swimming about. However, there was more dead coral than live coral. It was truly shocking. Once again, I left an island with a tug on my heart.

I grew up completely oblivious to the plight of our oceans. You can take small steps that will make a big impact. Simply by using sunscreen that doesn’t contain oxybenzone, you are helping save our oceans and protect your own health. Up to 14,000 tons is brought into the oceans by swimmers and triathletes wearing sunscreen.  Oxybenzone is toxic to coral. It causes endocrine disruption, DNA damage and exacerbates coral bleaching.

in 2016 the Ironman Corporation recognized the dangers of so many triathletes using sunscreen containing oxybenzone. It has begun a campaign to eradicate this toxic ingredient in its’ races. Kudos to Ironman!

Please kokua, if we are mindful, kind to one another and love instead of hate, we can make this world a better place. I challenge you to do this….simply be conscious of the life around you. When we move through life being mindful, its impact will be felt globally. Mahalo nui loa.

NOTE: A deposit is required at the time of booking. More details on scheduling page.